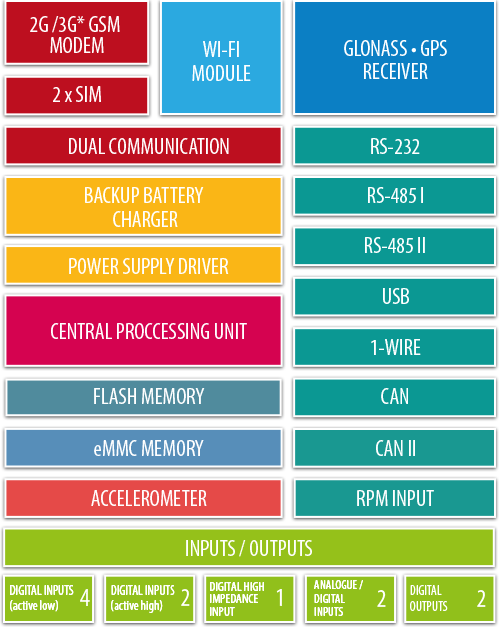 The 2G / 3G* GSM modem is intended to provide a connection between the controller and the GSM / UMTS mobile network.

The GSM signal is received and transmitted via an external GSM antenna. The controller is equipped with a SIM card to be identified by the GSM network and to be able to access the services provided by the mobile network operator.

The audio interface provides voice communication between vehicle driver and a dispatcher via GSM.

The AutoGRAPH-GSM+WiFi is equipped with a loudspeaker, a microphone and an Answer/Call button to make a two-way voice communication.

A built-in amplifier increases the signal amplitude 2.65 times and transfers it into the speaker.

The speaker output, microphone input and pins for connecting an external Answer/Call button are arranged on the singular 4-pin Mini-Fit connector.

Answering and making a call are performed by means of the button on the loudspeaker.

The high-performance Wi-Fi module is intended to provide a connection between the AutoGRAPH-GSM+WiFi and a wireless access point.

The GNSS module is designed using a highly sensitive receiver based on high performance uBlox M8 engine. It receives coded signals by means of external active GPS/GLONASS antenna from the satellites of the Global Positioning System (NAVSTAR) and GLONASS, and uses its internal computer to determine the geographical coordinates of the receiver position, the exact time, speed and direction of movement.

Received data is transferred via NMEA protocol from the GNSS module output to the centralprocessing unit for further processing.

The uBlox MAX-M8 supports concurrent reception of two GNSS systems and, as a result, the information being received is highly accurate and available even in the case of very poor visibility of satellites.

The power supply driver with protection circuits generates all of the necessary supply voltages for controller components. The primary power supply input ensures operation at vehicle system voltage of 10-50 V (max 60 V), which makes it possible to use the controller on the majority of vehicles without employing any additional voltage regulation.

Furthermore, the power supply driver protects the controller against polarity reversal, voltage overload, interference, etc. A resettable fuse is installed in the supply circuit of the printed circuit board in order to provide extra protection.

The AutoGRAPH-GSM+WiFi has a built-in charger to charge an external backup battery.

When the controller is powered by the vehicle power system, the power supply driver turns on the charger. The controller sends a notification to a preset telephone number when the backup battery voltage falls below the threshold.

The central processing unit is the core of the AutoGRAPH-GSM+WiFi controller, which unites all of the system components together and ensures their interaction in accordance with the program stored in the device.

The processing unit is a highspeed single-chip microcomputer able to perform computations of at a speed and accuracy level that is sufficient to meet various navigation and service challenges.

The custom firmware, developed by TechnoKom specialists, enables the CPU to receive data from the different modules of the system, to perform logical and mathematical processing of the data and to control the modules as appropriate. It should be noted that the functional capability of the controller firmware is being constantly enhanced and extended so as to provide users with new and improved features and options.

The FLASH memory module is designed to store up to 270,000 records for up to 10 years – even when the device is powered off.

The FLASH memory module in the AutoGRAPH-GSM+WiFi is designed to use the ring buffer principle, which means that new records will be written over the oldest records first, ensuring that the most recent data is always available.

In addition to FLASH memory, the AutoGRAPH-GSM+WiFi controller is equipped with eMMC memory with high-speed performance and low power consumption to store log-files and photos from cameras connected to the controller.

The AutoGRAPH-GSM+WiFi is equipped with 3-axis digital accelerometer with wide range of full scales from ±2g to ±16g intended to detect motion, determine the tracker’s orientation, measure vibration level, etc. The tracker can be set up to send a notification to a preset telephone number or data to a preset server, when detecting the acceleration exceeding a preset threshold.

RS-232 is a communication standard for serial communication between two devices: the AutoGRAPH-GSM+WiFi controller and any external device compatible with the controller’s firmware.

The AutoGRAPH-GSM+WiFi controller supports interaction with the external GPS/GLONASS receiver via NMEA 0183 standard, the CAN-LOG module and the AutoGRAPH-NAVIGATOR Display via RS-232.

RS-485 (TIA / EIA-485-A) is a data transfer standard for data transmission via a two-wire serial channel. This bus serves to simultaneously connect up to 32 different devices and sensors compatible with the controller’s firmware by two wires.

The controller is equipped with two RS-485 buses. Additional RS-485-2 Bus is designed for connecting photo cameras to the tracker.

The bus enables users to connect up to 8 fuel level LLS sensors, as well as Escort-TD, Strela-D485, DUT-E-485, DT7.3-06, UZI-1.х and other sensors, and some extra expansion modules to extend the controller’s functions, e.g. display for indication and messaging with a vehicle driver, passenger traffic metering unit, expansion modules for discrete and analogue inputs, barometrical altimeter, RS-232/RS-485 converters, etc.

The RS-485 port of AutoGRAPH-GSM+WiFi controllers support ModBUS protocol that enables users to connect the controller to thermal (or other) sensors, which transmit data via this protocol.

The USB port embedded into controller is intended to:

When using the device as a GPS mouse, the tracker, which is connected to the USB port of a PC, laptop or PDA with a data cable via virtual serial port (СОМ port), transmits the location data in RMC format through the NMEA protocol once per second. This enables the users to locate the object equipped with the AutoGRAPH-GSM+WiFi using software such as OziExplorer, Google Earth Plus/Pro, 2GIS for PC 3.0, Garmin, Navitel and many others. For details please refer to «Using the GPS mouse» document.

1-Wire, designed by Dallas Semiconductor Corporation, is a simple and convenient bus typically used to communicate with small devices and sensors such as digital thermometers, iButton keys, card readers, and other devices equipped with 1-Wire bus and compatible with the controller’s firmware.

The CAN bus is an industrial network standard primarily designed for interconnection of various actuators and sensors in a single network. It is used in the automotive industry as a management and control line. The CAN interface of the controller may be connected to the CAN bus of a vehicle and is intended for use with SAE J1939 / FMS standard protocol. This standard is widely used in vehicles of well-known truck manufacturers, such as SCANIA, MAN, VOLVO, DAF, IVEKO, RENAULT, MERCEDES (DaimlerChrysler), KAMAZ and MAZ trucks of latest models etc. Advanced users can set up the tracker to receive data in any CAN protocol using the GSMConf program.

Use of the two-wire CAN bus enables quick connection and allows access to a great number of parameters directly from the sensors of vehicles.

The RPM Input is used to control engine speed as measured in revolutions per minute, or RPM.

The I/O block is designed for monitor and measure parameters of external equipment and devices, as well as for control various actuators and warning devices.

The I/O block is divided into three sections:

These inputs have two states: «1» and «0» , and are able to show a change of input state, count pulses and measure frequency.

The controller has the four active low inputs and 2 active high inputs.

In addition, analogue inputs of the controller can operate as digital inputs with the configurable switching threshold.

Logic of the discrete inputs operation is shown in the table below:

Operation modes of the discrete inputs are fully programmable for each input and include:

• Normal input. In this mode, the digital inputs are monitored. When the input state changes, the time and location data is stored into the device memory. Normal mode is useful for recording the time of different sensors’ activation and for monitoring the performance of equipment and mechanisms, such as an alarm button, oil pressure sensor, ignition system, passenger presence sensor, security alarm triggering, opening of doors, limit switches of various special-purpose and construction machinery mechanisms, etc. This mode also enables the device to perform unscheduled transmission of data to the server via GPRS upon input state changes, as well as to send an SMS message to the specified phone number.

• Storage counter. This mode is intended to track the input switching states and to count various events. This may include counting of pulses from fuel-flow pulse output sensor (of DRT-5 or VZO type), passenger count, speed sensor, tipper body lift sensor, etc. In storage counter mode, the number of pulses from each sensor is stored in memory. The location data is not stored.

• Periodic counter. This mode is intended for counting of pulses within one minute. Periodic counter mode is used for taking the readings of sensors, which transmit measured values in pulse bursts in amounts proportional to the measured value. This mode is used, for example, for fuel level, temperature and engine speed sensors with pulse outputs. This mode does not involve recording of a track point into the storage memory when the input state changes.

Analogue inputs are designed to measure the signal level generated by analogue sensors and can be used to measure fuel level in a tank, temperature, pressure and other properties.

The AutoGRAPH-GSM+WiFi controller is equipped with two 10-bit analogue inputs, which are fully configurable. Each analogue input of the controller can be set up to record data when the level of the analogue signal changes by a specified value.

The measuring range of the second analogue input is 0 to 24 V (but not more than supply voltage level of the controller) or 0 to 1024 ADC stages.

Digital outputs are intended to control any external actuators and turn on warning devices.

The controller has two programmable, open collector, discrete outputs. The outputs are controlled by an SMS command and can be set up to send a pulse of a specified length or to switch to specified state. Advanced users can send control commands via the data server.

In simple case, the discrete output can be used to warn about speeding, an entrance or exit of the geofenced area, etc.